Two weeks ago, Leo Holley, Henrietta Davenport, Bridget McGirr and Hugo Bruning proudly represented
Matahui School at the first round of the EPRO8 challenge, which this year, was held in Katikati. They had
every reason to feel proud, as we are of their achievement because they won the event. An outstanding team
achievement and so I thought I would interview the students to see if the old adage is in fact true. Read on.

What made you all want to be of this team? It seemed like it would be fun, especially as you get the
chance to invent and experiment with making things like robots and other mechanical devices.

How did the team prepare for the challenge? (initial burst of haughty laughter). Actually we didn’t really
prepare which didn’t worry us – except Bridget. We probably should have because we would have been able
to save time because we would have had a better understanding of how to wire things up. We also wasted
time constructing some framing as we didn’t recognise the importance of using triangles in the construction
phase.

So given you didn’t prepare as well as you might have, why do you think you were so successful in
the end? We worked so well as a team. Everyone was good at something different so we were able to
divide up tasks and shared the responsibility of completing each challenge we faced. We listened to each
other without criticising. We collaborated and co-operated, probably better than some of the other teams.
When you learned you had won what emotions did you experience? A whole range – happiness;
excitement; surprise and delight.
Where will this success take you next? We will be heading to the semi-finals and if we do well there then
it will be on to the finals.

What do you think you learned from this experience? We need to do some preparation this time so that
we are more organised. We found out that we need to spend a little more time planning before we launch
into creating and making. And, we learned the value of effective teamwork.

So, it would seem that there is no “I in team, certainly not if you are in a Year 7/8 Matahui School EPRO8
team!

FOOTNOTE: According to the judge who scored the EPRO8 Challenge, the scores reached by the top
eight teams at the Katikati event was so high, that they would have scored in the top three at any of the
other events held thus far. WOW! 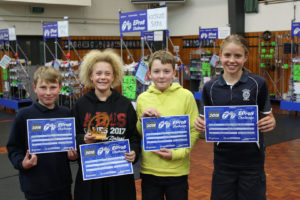