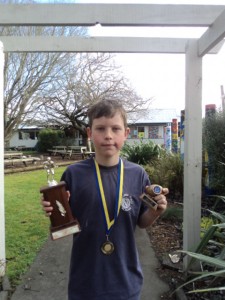 Harry Chissell (photographed above) from Room 6 at Matahui School celebrated success with his Te Puna under 11 rugby team over the weekend. They beat Papamoa Blue in the Western Bay of Plenty Championship. Harry said “They scored the first try but then we struck back by kicking deep into their half. From there we scored and we went on to win 36-7.” At a prize-giving last weekend Harry was also awarded ‘Most Improved Player’ for the season.

“Next we play the winners of the Eastern Bay and it should be a hard game.” said Harry as he looks toward his next challenge.