“Everything you can imagine is real.”
Pablo Picasso

I recently read an article by John Spencer centred on imagination and how, though it changes over time (as we grow older) it should never shrink, diminish or disappear, rather it should be something that expands and continues to evolve.

So the last couple of days I have been a “Manny” or the Poppa equivalent of one. The sense of wonder, delight in exploring, creating and inventing that I was exposed to in following our grand- daughter gave me the opportunity to be part of the imaginative worlds she created. She gave me a mandate to “tetend” with her – how special. 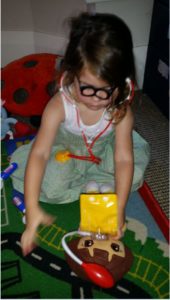 She also gave me a chance to heighten my imaginative skills in terms of how I engaged with her in “play.” So when it came to dinner time and encouraging her to eat vegetables, it seemed the most natural thing to do was to create a vegetable animal – so successful I might add that she ordered a second though did not really like the “ears.” 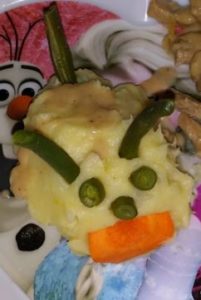 At Matahui School we actually have students who ooze imagination and creativity (and actually, so do their parents).After our earthquake evacuation practice drill a week ago, a question was asked – What do we do if there is a Tsunami warning? The answer – We move to higher ground which means we adopt a different structure for this evacuation. The following day our Year 3 and 4 students filled a wheel barrow with water and built from wood, what in essence was a tidal wave maker. They subsequently asked for white dye to help simulate waves and red dye as there would be blood if people got hurt – the power of imagination – brilliant.

Here is the thing – you don’t need to be a grandfather to reconnect with your imagination. Albert