Children have the capacity to demonstrate heightened curiosity and genuine interest in the world around them. They naturally show the propensity to explore, investigate and discover; they are in essence, scientists. 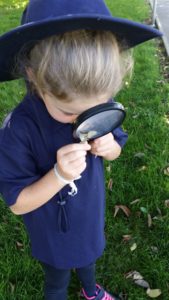 The way Matahui students connect to the environment may not necessarily be unique, but it is significant. They enjoy going outside and the school playground becomes a microcosm of scientific opportunities – a living laboratory. When I shared Saxon Russell’s story (which KVH weaved into the report below) with the students in each class and informed them that the beetle he had discovered at school might be a horticultural “nasty,” they headed out on an intense search.

Prior to leaving school a six year old student at Matahui School in Katikati found a stink bug nymph, had his mother take a photo and proudly showed the critter off to his Dad. Being the small world that it is, Dad’s work sometimes relates to the kiwifruit industry and he had been contacted in the past by KVH about the Brown Marmorated Stink Bug (BMSB) so knew to make a report.

Formal identification by the Ministry for Primary Industries (MPI) found that the bug was a native Australian Green Shield Bug.

This is a fantastic example of the great awareness of our environment, and all the living things in it (of which biosecurity is such an important element), being built up from the ground level by teachers and principals day-to-day in, and outside of the classroom. Raising public awareness is what we are all about, and our goal is for the whole country to form a team of 4.7 million biosecurity conscious New Zealanders by 2025. (Kiwifruit Vine Health 2018).

“Saxon the Scientist” and his scientific Matahui buddies hardly left a leaf unturned such was the excitement of the challenge to locate and carefully capture the beetle he had seen. Our Matahui scientists recognized the importance of the task ahead and became part of an authentic scientific process, one designed to carefully monitor our environment. They have certainly become biosecurity conscious watchdogs. 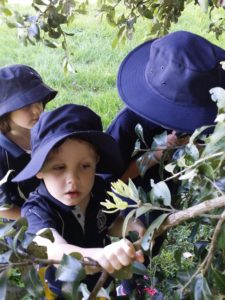 We must continue to nurture the innate curiosity of the children we teach and give them authentic ways to demonstrate scientific thinking and methodology, especially in relation to the environment. They will learn that their actions can have an immense impact on the way we care for and sustain the planet on which we live.