When I was working in Hong Kong I vividly remember how excitable a colleague of mine became when he purchased the first iPhone to be launched. He suggested to me that I get one as the phone I was using resembled a small brick. I jokingly told him that I would wait for the iPhone 2 to be launched, and of course within a year, version 2 was released. Well, a couple of weeks ago model 7 was launched (I still don’t have one as it happens). I am waiting for the iPhone 20 to reach store shelves. It is virtually impossible to keep pace with the refinements, innovations and improvements that are made in every domain within which you find technology.

The impacts of technology cannot be underestimated when it comes to the students we teach. They absorb any change with ease and generally understand, appreciate and utilise technology without seeing it as some form of gadgetry. Interestingly Matahui students can often be seen in the playground developing an inspirational idea into an innovation.

When the Olympics started, I happened upon a group of students who had just released their own mobile phones, prior to the iPhone 7 launch I hasten to add. Their phones, whilst only made of cardboard reflected their personalities and interests in terms of their creative design. Moreover they created apps that were specifically focused on  accessing the Olympic games 24/7. Such was the intensity of imagination it overflowed into the sand pit where one of the students created a sand iPad, complete with a power cable for recharging purposes. 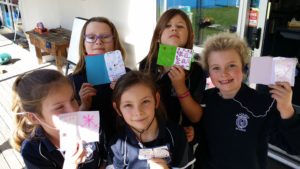 Our students are truly representative of the technology”boffins” of the future. If Apple, Google or Tesla are looking for recruits  – budding scientists and innovators, come to Matahui School – we have them here in abundance.